The practise of Mary the Prophetess in the Alchymicall Art. 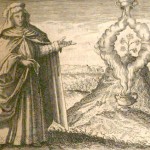 Aros the Philosopher had a meeting with Mary the Prophetess the Sister of Moyses, and approaching to her, he paid her respect and said unto her. O Prophetess, I have truly heard many say of you that you whiten the Stone in one day.

And Mary said, Yea, Aros, even in a part of one day.

Aros said: O Lady Mary, when will the Work be which you affirm? How shall we whiten and afterwards add blackness?

Mary said; O Aros, oftentimes Nations have dyd about this part. Know you not, O Aros; that there is a water or a thing which whitens Hendragem?

Then Aros answering said to her. O Lady it is so as you say, but in a long time.

Mary answered, Hermes in all his Books has said that the Philosophers whiten the Stone in one hour of the day.

Aros said to her, Oh how excellent is that?

Mary said, it is most excellent to him that is ignorant of it.

Aros said, if men have all the four Elements, he [Hermes] said that their fumes might be compleated, and complexioned, and coagulated, and retained in one day, untill they doe fullfill the consequence (i.e. attain the end).

Mary said, O Aros, by God, if thy senses or understanding were not solid, you should not hear these words from me, untill the Lord should fill my Heart with the grace of his divine Will. Nevertheless take the Allum of Spain, the white gumm and the red gumm, which is the Kibric of the Philosophers, and their Sol and the greater Tincture, and marry Gumm with Gumm togeather with a true Matrimony. Mary said, make them like a running Water, and vitrify this water which has been laboured or wrought upon for one day, out of the two Lubechs, upon the fixed body, and liquefy them by the secret of Nature in the Vessel of Philosophy. Did you understand us?

Mary said, Keep the fume and take care that none of it fly away. And let your measure be with a gentle fire such as is the Measure of the heat of the Sun in the Month of June or July, and stay by your Vessel and behold it with care how it grows black, grows red, and grows white in less than three hours of the day, and the fume will penetrate the body, and the Spirit will be bound up, and they will be like milk, incerating, and liquefying and penetrating: and that is the secret.

Aros said I do not say that this will be allways.

Mary said unto him: Aros, and this is more wonderfull concerning this, that it was not among the Ancients, nor did it come to him by curing, or by the Medicinall Art and that is take the white, clear and honoured Herb growing on the Hillocks, and pound it fresh as it is in its Hour, and that is the true Body not flying from the Fire.

And Aros said it is the Stone of Truth?

And Mary said yes. But yet men know not this regimen (rule or way of working) with the speediness thereof.

Aros said, and what afterwards.

Mary said, vitrify upon it Kibric or Zibeic and there are the two fumes comprehending the two Lights, and project upon that the complement of the Tinctures of the Spirits, and the weights of Truth, and pound it all, and put it to the Fire, and you shall see wonderfull things from them. The whole goverment consists in the temper of the Fire, O how strange it is, how it will be moved from one colour to another, in less than an hour of the Day, untill it arrive at the mark of redness and whiteness, and cast away the Fire and permit it to cool, and open it and you will find the clear pearly Body to be of the Colour of the Poppy of the Wood mixt with whiteness and that is it which is incerating, liquefying and penetrating, and one golden piece thereof, the weight of a small golden Coin, falleth upon a thousand thousand and two hundred thousand. That is the hidden secret.

Then Aros fell down upon his face.

And Mary said to him, Lift up your head Aros: because I will shorten for you the thing, as that clear body which is thrown upon the Hillocks, and is not obtained by putrefaction or motion. Take and pound it with Gumm Elsaron, and with the two fumes because the Body comprehending or retaining them is Gumm Elsaron and grind it all. Therefore approach because it all melts. If you project its wife upon it, it will be as a distilling Water, and when the Aire shall strike it, it will be congealed and be one body, and make projection of it, and you will behold Wonders: O Aros that is the hidden secret of Scholia; and know that the said two fumes are the Root of this Art, and they are the white Kibric and the humid calx, but the fixed Body is of the Heart of Saturn comprehending the Tincture, and the Fields of Wisdom or of Scholia. And the Philosophers have named it by many and all names, and received or gathered from the Hillocks it is a clear white Body, and these are the medicine of this Art, part is procured and part is found upon the Hillocks; and know Aros that the wise men have not called it the Fields of Wisdom, or of Scholia, unless because Scholia will not be compleated but by it; and in the Scholia there are nothing but wonderfull things. For there also enters into them the four Stones, and its true regimen is as I have said. And that is first Scoyare, Ade, and Zethet; by that make your Allegory as Hermes has done in his Books Scoyas, and the Philosophers have allways made the regimen longer, and have resembled the work to every thing which ought not to make the work, and they make the Magistery to be in one year, and this but onely for hiding it from the ignorant people, untill it be confirmed in their Hearts and their senses (till they believe the Art), because the Art will not be compleated except only in Gold; because it is the great secret of God: and they who hear of our secrets doe not verify them (nor believe them to be true), by reason of their ignorance. Did you understand Aros?

Aros said yes. But tell me about that vessel, without which the Work will not be accomplisht.

Mary said that the Vessel of Hermes which the Stoicks have concealed, and it is not a Necromanticall Vessel, but it is the Measure of your Fire.

Aros said: O Lady you have obeyed (been a scholar) in the Society of Scoyari: O Prophetess, have you found among the Secrets of the Philosophers, which they have set down in their Books, that any one can make the Art out of one Body?

And Mary said: Yes: which Hermes has not taught, because the Root of Scholia is a body which cannot be made smooth or plain and incurable (unconquerable) and it is a poyson mortifying all bodies, and it pulverises them and coagulates Mercury with its odour. And shee said, I swear to you by the eternall God, that that poison when it is dissolved untill it is made a subtile Water, I care not by what dissolution it is done, does coagulate Mercury into Luna with the strength of Truth, and it falls into the Throne of Jupiter, and forms him into Luna. And the Science is in all Bodys, but the Stoicks, by reason of the shortness of their lives, and the Length of the Work, have concealed this; and they found out these tinging Elements, and they increased them, and all the Philosophers teach them, except the Vessel of Hermes, because it is divine, and of the Wisdom of the Lord hidden from Nations: and they who are ignorant of it, know not the Regimen of Truth, because of their Ignorance of the Vessel of Hermes.

Mary briefly soundeth forth
Strange things like Thunder round the Earth.
She with two Gumms makes the Bottome stay
What else would fly away.
Three things if you three hours attend
Are chained together in the End.
Mary the Light of dew, and Art has got
In three hours to tye the Knot.
Pluto’s daughter, it is she
Who bindeth Loves confederacy
Joyned with three seeds she does aspire
To be exalted in the Fire.