The tatwas are the five modifications of the great Breath. Acting upon prakriti, this Great breath throws it into five states, having distinct vibratory motions, and performing different functions. The first outcome of the Evolutionary State of parabrahma is the akasa tatwa. After this come in order the vayu, the taijas, the apas and the prithivi. They are variously known as mahabhutas. The word akasa is generally translated into English by the word ether. Unfortunately, however, sound is not known to be the distinguishing quality of ether in modern English Science. Some few might also have the idea that the modern medium of light is the same as akasa. This, I believe, is a mistake. The luminiferous ether is the subtle taijas tatwa, and not the akasa. All the five subtle tatwas might no doubt be called ethers, but to use it for the word akasa, without any distinguishing epithet, is misleading. We might call akasa the sonoriferous ether, the vayu the tangiferous ether, apasthe gustiferous ether, and prithivi the odoriferous ether. Just as there exists in the universe the luminiferous ether, an element of refined mater without which it has been found that the phenomena of light find no adequate explanation, so do there exist the four remaining ethers, elements of refined matter, without which it will be found that the phenomena of sound, touch, taste and smell find no adequate explanation.

Suppose in the figure: 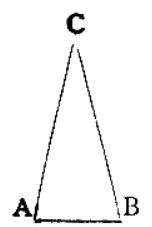 The taijas tatwa of the Ancients is then exactly the luminiferous ether of the Moderns, so far as the nature of the vibration is concerned. There is no exception, however, of the four remaining ethers, at all events in a direct manner, in Modern Science. The vibrations of akasa, the soniferous ether, constitute sound; and it is quite necessary to recognize the distinctive character of this form of motion.

The experiment of the bell in a vacuum goes to prove that the vibrations of atmosphere propagate sound. Any other media, however, such as the earth and the metals, are known to transmit sound in various degrees. There must, therefore, be some one thing in all these media which gives birth to sound – the vibration that constitutes sound. That something is the Indian akasa.

But akasa is all-pervading, just as the luminiferous ether. Why, then, is not sound transmitted to our ears when a vacuum is produced in the bell-jar? The real fact is that we must make a difference between the vibrations of the elements that constitute sound and light, etc., and the vibrations in the media which transmit these impressions to our senses. It is not the vibrations of the ethers – the subtle tatwas – that cause our perceptions, but the ethereal vibrations transferred to different media, which are so many modifications of gross matter – the sthula Mahabhutas. The luminiferous ether is present just as much in a darkened room as in the space without. The minutest space within the dimensions of the surrounding walls themselves is not void of it. For all this the luminosity of the exterior is not present in the interior. Why? The reason is that our ordinary vision does not see the vibrations of the luminiferous ether. It only sees the vibrations of the media that the ether pervades. The capability of being set into ethereal vibrations varies with different media. In the space without the darkened room the ether brings the atoms of the atmosphere into the necessary state of visual vibration, and one wide expanse of light is presented to our view. The same is the case with every other object that we see. The ether that pervades the object brings the atoms of that object into the necessary state of visual vibration. The strength of the ethereal vibrations that the presence of the sun imparts to the ether pervading our planet is not sufficient to evoke the same state in the dead matter of the darkening walls. The internal ether, divided from the eternal one by this dead mass, is itself cut off from such vibrations. The darkness of the room is thus the consequence, notwithstanding the presence therein of the luminiferous ether. An electric spark in the vacuum of a bell-jar must needs be transmitted to our eyes, because the glass of the jar which stands in contact with the internal luminiferous ether has a good deal of the quality of being put into the state of visual vibration, which from thence is transmitted to the external ether and thence to the eye. The same would never be the case if we were to use a porcelain or an earthen jar. It is this capability of being put into the state of visual vibrations that we call transparency in glass and similar objects.

To return to the soniferous ether (akasa): Every form of gross matter has, to a certain extent, which varies with various forms, what we may call auditory transparency.

It throws matter which is subject to it, into the form of a dotted sheet:

These dots are little points, rising above the common surface so as to produce microscopic pits in the sheet. It is said to move by fits and starts (sankrama), and to move in all directions (sarvatogame). It means to say that the impulse falls back upon itself along the line of its former path, which lies on all sides of the direction of the wave:

It will be understood that these ethers produce in gross media vibrations similar to their own. The form, therefore, into which the auditory vibrations throw the atmospheric air is a true clue to the form of the ethereal vibration. And the vibrations of atmospheric air discovered by Modern Science are similar.

Now we come to the tangiferous ether (vayu). The vibrations of this ether are described as being spherical in form, and the motion is said to be at acute angles to the wave (tiryak). Such is the representation of these vibrations on the plane of the paper:

The remarks about the transmission of sound in the case of akasa apply here too, mutatis mutandis. The gustiferous ether (apas tatwa) is said to resemble in shape the half moon. It is, moreover, said to move downward. This direction is opposite to that of the luminiferous ether. This force therefore causes contraction. Here is the representation of the apas vibrations on the plane of paper:

The process of contraction will be considered when I come to the qualities of the tatwas.

The odoriferous ether (prithivi) is said to be quadrangular in shape, thus:

This is said to move in the middle. It neither moves at right angles, nor at acute angles, nor upwards, nor downwards, but it moves along the line of the wave. The line and the quadrangle are in the same plane.

These are the forms, and the modes of motion, of the five ethers.

Of the five sensations of men, each of these gives birth to one, thus:

In the process of evolution, these co-existing ethers, while retaining their general, relative forms and primary qualities, contract the qualities of the other tatwas. This is known as the process of panchikarana, or division into five. 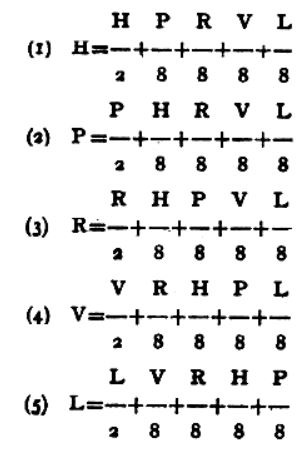 One molecule of each ether, consisting of eight atoms, has four of the original principle ethers, and one of the remaining four.

The following table will show the five qualities of each of the tatwas after panchikarana:

It might be remarked here that the subtle tatwas exist now in the universe on four planes. The higher of these planes differ from the lower in having a greater number of vibrations per second. The four planes are:

I shall discuss, however, some of the secondary qualities of these tatwas.

If we apply fire to it, the luminiferous ether in it is set in motion, and that drives the gross atoms of the lump into similar motion. Suppose (a) is an atom. This being impelled to assume the shape of the taijas, vibration goes towards (a’), and then takes the symmetrical position of (a’). Similarly does every point change its place round the center of the piece of metal. Ultimately the whole piece assumes the shape of A’B’C’. Expansion is thus the result.

This, I believe, is sufficient to explain the general nature of the tatwas. The different phases of their manifestation on all the planes of life will be taken up in their proper places.