III.
THE MASTER.
*      *      *      *      *      *
To understand literally the symbols and allegories of Oriental books as to ante-historical matters, is willfully to close our eyes against the Light. To translate the symbols into the trivial and commonplace, is the blundering of mediocrity.
All religious expression is symbolism; since we can describe only what we see, and the true objects of religion are THE SEEN. The earliest instruments of education were symbols; and they and all other religious forms differed and still differ according to external circumstances and imagery, and according to differences of knowledge and mental cultivation. All language is symbolic, so far as it is applied to mental and spiritual phenomena and action. All words have, primarily, a material sense, however they may afterward get, for the ignorant, a spiritual non-sense. “To retract,” for example, is to draw back, and when applied to a statement, is symbolic, as much so as a picture of an arm drawn back, to express the same thing, would be. The very word “spirit” means “breath,” from the Latin verb spiro, breathe.
To present a visible symbol to the eye of another is not necessarily to inform him of the meaning which that symbol has to you. Hence the philosopher soon superadded to the symbols explanations addressed to the ear, susceptible of more precision, but less effective and impressive than the painted or sculptured forms which he endeavored to explain. Out of these explanations grew by degrees a variety of narrations, whose true object and meaning were gradually forgotten, or lost in contradictions and incongruities. And when these were abandoned, and Philosophy resorted to definitions and formulas, its language was but a more complicated symbolism, attempting in the dark to grapple with and picture ideas impossible to be expressed. For as with the visible symbol, so with the word: to utter it to you does not inform you of the exact meaning which it has to me; and thus religion and philosophy became to a great extent disputes as to the meaning of words. The most abstract expression for DEITY, which language can supply, is but a sign or symbol for an object beyond our comprehension, and not more truthful and adequate than the images of OSIRIS and VISHNU, or their names, except as being less sensuous and explicit. We avoid sensuousness only by resorting to simple negation. We come at last to define spirit by saying that it is not matter. Spirit is–spirit.
A single example of the symbolism of words will indicate to you one branch of Masonic study. We find in the English Rite this phrase: “I will always hail, ever conceal, and never reveal;” and in the Catechism, these:
Q∴ “I hail.”
A∴ “I conceal;”
and ignorance, misunderstanding the word “hail,” has interpolated the phrase, “From whence do you hail!'”
But the word is really “hele,” from the Anglo-Saxon verb 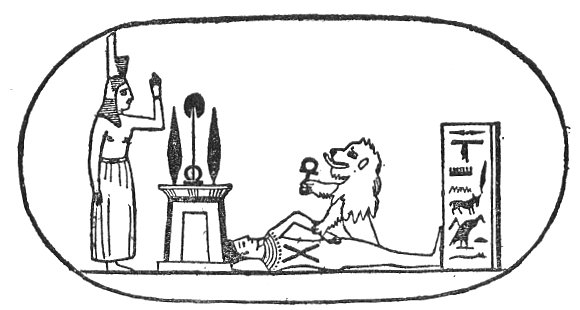 The identity of the legends is also confirmed by this hieroglyphic picture, copied from an ancient Egyptian monument, which may also enlighten you as to the Lion’s grip and the Master’s gavel.‏ ו?A?B‎, in the ancient Phœnician character,

, and in the Samaritan,

, A B, (the two letters representing the numbers 1, 2, or Unity and Duality, means Father, and is a primitive noun, common to all the Semitic languages.
It also means an Ancestor, Originator, Inventor, Head, Chief or Ruler, Manager, Overseer, Master, Priest, Prophet.
‏ו ?A?B?Y‎ is simply Father, when it is in construction, that is, when it precedes another word, and in English the preposition “of” is interposed, as ‏ו ?A?B?Y‎-‏ו ?A?L‎, Abi-Al, the Father of Al.
Also, the final Yo_d means “my”; so that ‏ו ?A?B?Y‎ by itself means “My father.” ‏ו ?D?W?Y?D ?A?B?Y‎, David my father, 2 Chron. ii. 3.
‏ו ?W‎ (Vav) final is the possessive pronoun “his”; and ‏ו ?A?B?Y?W‎, Abiu (which we read “Abif”) means “of my father’s.” Its full meaning, as connected with the name of Khu_ru_m, no doubt is, “formerly one of my father’s servants,” or “slaves.”
The name of the Phœnician artificer is, in Samuel and Kings, ‏ו ?X?Y?Rמ‎ and ‏ו ?X?Y?R?Wמ‎–[2 Sam. v. 11; 1 Kings v. 15; 1 Kings vii. 40]. In Chronicles it is ‏ו ?H?W?Rמ‎, with the addition of ‏ו ?A?B?Y‎. [2 Chron. ii. 12]; and of ‏ו ?A?B?Y?W‎ [2 Chron. iv. 16].
It is merely absurd ‘to add the word “Abif,” or “Abiff,” as part of the name of the artificer. And it is almost as absurd to add the word “Abi,” which was a title and not part of the name. Joseph says [Gen. xlv. 8], “God has constituted me ’Ab l’Paraah, as Father to Paraah, i.e., Vizier or Prime Minister.” So Haman was called the Second Father of Artaxerxes; and when King Khu_ru_m used the phrase “Khu_ru_m Abi,” he meant that the artificer he sent Schlomoh was the principal or chief workman in his line at Tsu_r.
A medal copied by Montfaucon exhibits a female nursing a child, with ears of wheat in her hand, and the legend (Iao). She is seated on clouds, a star at her head, and three ears of wheat rising from an altar before her.
HORUS was the mediator, who was buried three days, was regenerated, and triumphed over the evil principle.
The word HERI, in Sanscrit, means Shepherd, as well as Saviour. CRISHNA is called Heri, as JESUS called Himself the Good Shepherd.
‏ו ?X?W?R‎, Khu_r, means an aperture of a window, a cave, or the eye. Also it means white. In Syriac,

. It is the name of a city, [Josh. xix. 38]; and of a man, [Ezr. ii. 32, x. 31; Neh. iii. 11].
‏ו ?X?Y?R?H‎, Khirah, means nobility, a noble race.
Buddha is declared to comprehend in his own person the essence of the Hindu Trimurti; and hence the tri-literal mono-syllable Om or Aum is applied to him as being essentially the same as Brahma-Vishnu-Siva. He is the same as Hermes, Thoth, Taut, and Teutates. One of his names is Heri-maya or Hermaya, which are evidently the same name as Hermes and Khirm or Khu_rm. Heri, in Sanscrit, means Lord.
A learned Brother places over the two symbolic pillars, from right to left, the two words

of the Sun-God, Amun-ra. Is it an accidental coincidence, that in the name of each murderer are the two names of the Good and Evil Deities of the Hebrews; for Yu-bel is but Yehu-Bal or Yeho-Bal? and that the three final syllables of the names, a, o, um, make A∴U∴M∴ the sacred word of the Hindoos, meaning the Triune-God, Life-giving, Life-preserving, Life-destroying: represented by the mystic character

The Forty-seventh Proposition is older than Pythagoras. It is this: “In every right-angled triangle, the sum of the squares of the base and perpendicular is equal to the square of the hypothenuse.” The square of a number is the product of that number, multi-plied by itself. Thus, 4 is the square of 2, and 9 of 3.
The first ten numbers are:
1, 2, 3, 4, 5, 6, 7, 8, 9, 10;
their squares are
1, 4, 9, 16, 25, 36, 49, 64, 81, 100;
and
3, 5, 7, 9, 11, 13, 15, 17, 19
are the differences between each square and that which precedes it; giving us the sacred numbers, 3, 5, 7, and 9.
Of these numbers, the square of 3 and 4, added together, gives the square of 5; and those of 6 and 8, the square of 10; and if a right-angled triangle be formed, the base measuring 3 or 6 parts, and the perpendicular 4 or 8 parts, the hypothenuse will be 5 or 10 parts; and if a square is erected on each side, these squares being subdivided into squares each side of which is one part in length, there will be as many of these in the square erected on the hypothenuse as in the other two squares together.
Now the Egyptians arranged their deities in Triads–the FATHER or the Spirit or Active Principle or Generative Power; the MOTHER, or Matter, or the Passive Principle, or the Conceptive Power; and the SON, Issue or Product, the Universe, proceeding from the two principles. These were OSIRIS, ISIS, and HORUS. In the same way, PLATO gives us Thought the Father; Primitive Matter the Mother; and Kosmos the World, the Son, the Universe animated by a soul. Triads of the same kind are found in the Kabalah.
PLUTARCH says, in his book De Iside et Osiride, “But the better and diviner nature consists of three, that which exists within the Intellect only, and Matter, and that which proceeds from these, which the Greeks call Kosmos; of which three, Plato is wont to call the Intelligible, the ‘Idea, Exemplar, and Father’; Matter, ‘the Mother, the Nurse, and the place and receptacle of generation’; and the issue of these two, ‘the Offspring and Genesis,'” the Kosmos, “a word signifying equally Beauty and Order, or the Universe itself.” You will not fail to notice that Beauty is symbolized by the Junior Warden in the South. Plutarch continues to say that the Egyptians compared the universal nature to what they called the most beautiful and perfect triangle, as Plato does, in that nuptial diagram, as it is termed, which he has introduced into his Commonwealth. Then he adds that this triangle is right-angled, and its sides respectively as 3, 4, and 5; and he says, “We must suppose that the perpendicular is designed by them to represent the masculine nature, the base the feminine, and that the hypothenuse is to be looked upon as the offspring of both; and accordingly the first of them will aptly enough represent OSIRIS, or the prime cause; the second, ISIS, or the receptive capacity; the last, HORUS, or the common effect of the other two. For 3 is the first number which is composed of even and odd; and 4 is a square whose side is equal to the even number 2; but 5, being generated, as it were, out of the preceding numbers, 2 and 3, may be said to have an equal relation to both of them, as to its common parents.”
*      *      *      *      *      *
The clasped hands is another symbol which was used by PYTHAGORAS. It represented the number 10, the sacred number in which all the preceding numbers were contained; the number expressed by the mysterious TETRACTYS, a figure borrowed by him and the Hebrew priests alike from the Egyptian sacred science, and which ought to be replaced among the symbols of the Master’s Degree, where it of right belongs. The Hebrews formed it thus, with the letters of the Divine name: